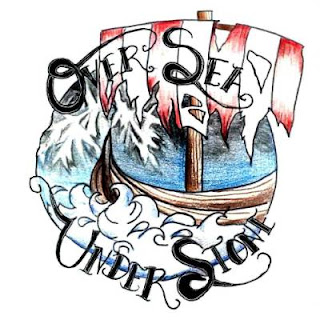 The five tracks of this debut EP from the Seattle-based group of Over Sea, Under Stone bring the band out into the public eye with a set of retro hard rock/stoner rock tunes built on strong rhythms and gnarled riffs.  The seven-minute "Vlad" is the big stand-out, running at about twice the length of the average, and forming what I guess is a vampire romance tale with its lyrics of "I have crossed oceans of time for you!", but there's good work put into each of the EP's tracks.
One of the high points is the clarity of the beats and chords, even at the band's fuzziest and most unchained moments.  There's a firm pulse to the songs which makes them easy to remember after you've finished playing them at high volume, while the noodly guitar-work does its job of pulling listeners into the moment.  Fans of heavy hard rock will find their needs well-satisfied by this group's first effort, and should anticipate a follow-up in the near future.
~ Gabriel

Over Sea, Under Stone - Sinner