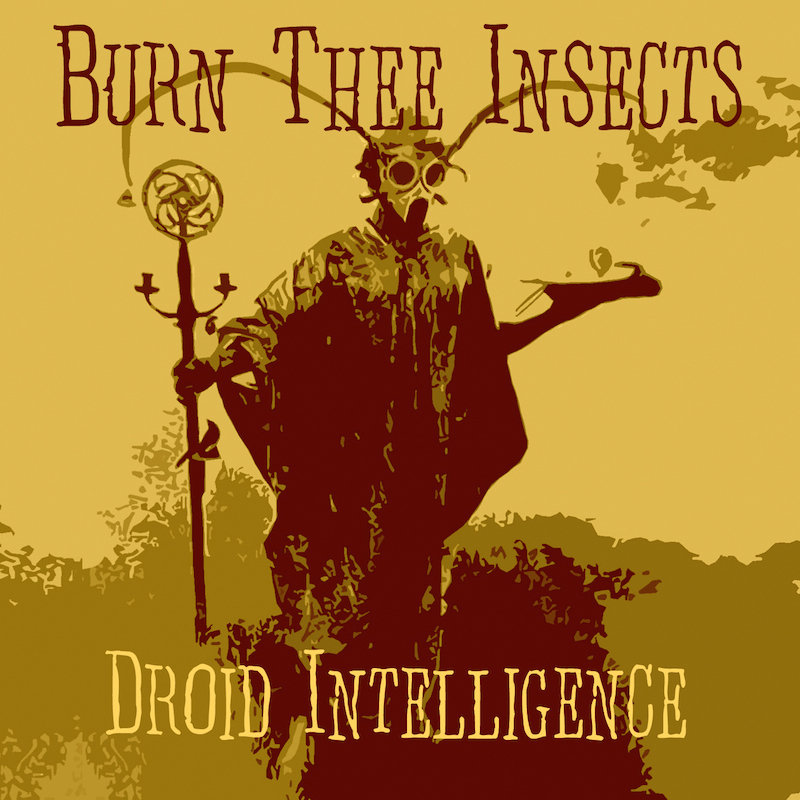 Doom metal is always going to be best experienced by being played with headphones alone late at night to create the perfect atmosphere to drown out the physical world to make a type of personal journey through bleak landscapes, in my mind.  And the album Droid Intelligence understands that concept to a T.  Burn Thee Insects are an extremely talented duo consisting of father and son Lucust and Mitchell French, who hail from the Mojave Desert, where the heat and sweat just burn through your head leading into madness and destruction or leave you a withered shell.
Constant expansion and retraction of every instrument are a basic theme present throughout the album, but with enough variation in sonics and mood that it never seems tired or monotonous.
Album opener "Hydroponics" evokes the study of a dissonant mood with powerful drums and guitars, combined with a despondent vocal style not dissimilar to that of the great Josh Homme, although out of inspiration, not mimicking in any way.  The general feeling and mood never lets up or changes from a building charmed primal drive for creating psychedelic tones, not like 'flower children of the hippie era,' but more like those searching for euphoria from bending and cutting mundane living down to a bloody pulp to make it their own.
"Distorted Seclusion" continues with drones and a magical boredom only formed from seeking more from staring at oblivion and carving out a way to find solace in a world that casts you out.  "A Swarm Of Bees" ends the album with the whining screech of a motor finally burning up after traversing through the Mojave itself, reminding us not to stare too deep into the sun.  You might just burn your brain out.
Currently the Burn Thee Insect's Bandcamp feature not only this and their debut album, but also their EP entitled Head to the Floor, where they began to carve out their new genre-defining sound.
~Richard

For Fans Of; Queens of the Stone Age, Kyuss, Them Crooked Vultures, Sleep, Goatsnake