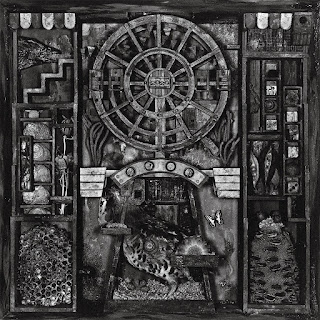 This album has been sitting in our submission pile for too long, a consequence of the high number of interesting things we get sent, and as I looked it over in preparation for writing this review, I started getting pretty excited.  A Japanese band grounded in doom metal, but with a spread of other influences, and operating (so far) on the schedule of releasing an album once every nine years?  Promising stuff, and as the album rattled into life with the noisy opening track "Return to the Planet", I felt pretty confident that they would deliver.
And they certainly did, in ways that I didn't expect, though I have to say I'm happy about that.  Had I gotten exactly what I thought was coming, there would have been some disappointment, silly as that is.  Instead, King Goblin brought out song after song of twisted ingenuity, soldering in a sweet melody here, a crank of dirty rock there, some psych-like guitar meltdowns, bluesy progressions, jazzy fusions, and more, until I just relaxed and went with it.
Once I slipped into that mode, everything was slick.  Riding with riffs as long as they lasted, bouncing from one rhythm to the next, and nodding along with whatever rebellious lyrics were being delivered made for an unpredictable but always enjoyable trip through the hazy combo of the band-members' imaginations and musical tastes.  And hey, that's not even mentioning the bizarre but delightful cover of "Mississippi Queen" they throw in towards the end.
It's been a while since I've had so much outright fun with an album, let alone one with so much inspired, creative flair and freedom of style.  Top-notch stuff, through and through, and an album which I'm looking forward to playing over and over again.  A limited number of CD copies are available from the group's BandCamp page, or you can snag a digital copy; and don't get scared off by the price, I'll swear right here that it's worth every penny.
~ Gabriel