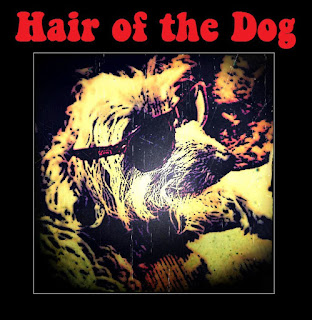 Retro rock is a busy genre.  In this age of smartphones and social media there's something hugely appealing about a set of good old-fashioned rock songs and, despite occupying a genre bustling with worthwhile groups, Hair Of The Dog stand out.  The Scottish trio's self-titled debut is a collection of songs that really can't be argued with; memorable riffs, powerful vocals and a quality rhythm section give this set of seven songs a real sense of quality.
At times there's a hint of late '70s proto-metal in Hair Of The Dog's sound, but for the most part, they bring to mind the pioneering early '70s heavy blues rock work of groups like The Groundhogs.  The band play with aptitude and energy throughout; the impassioned energy of "Empty As The Wind" is proof enough of that.  "That Night" earns its distinction as one of the album's best songs through a compelling riff and memorable chorus.  It's not all cult early '70s heavy rock though; the strutting groove of "Concrete Waves" invokes AC/DC's classic "Rock 'n' Roll Ain't Noise Pollution".
Hair Of The Dog's debut album is not one that will stagger with never-before-heard sounds but, far more importantly, it is one that manages to be an excellent listen through virtue of quality songwriting, good musicianship and rock solid execution.  What Hair Of The Dog do, they do very well - and anyone who digs quality heavy rock should check this out pronto.
~ Martin