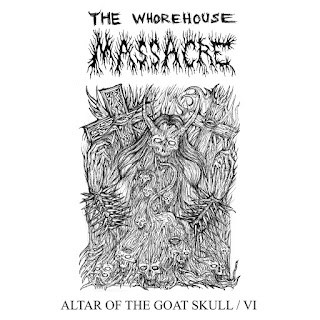 Combining two EPs into one big release (as something of an appetizer to their upcoming full album), Canadian group The Whorehouse Massacre show off their doom/sludge hybridization with thirteen tracks (including a cover of Sloth's "Sassy Pants").  Thick fuzz on the bass, cutting tones from guitar, heavy drum-beats, and low-pitched growls come together with a cohesive thrust of sonic grime.
Things are kept mean and gritty, and it's clear that the group isn't looking to win over anyone not already attuned to their vicious doom frequencies.  Personally, that's a refreshing change from the friendliness of bands whose sole inspiration comes from '70s heavy rock, and it gives TWM a more immediate and vitalized musical character.  A number of the songs forego vocals entirely, letting the swampy tones well up in stereo-corroding intensity, and with these the band does a solid job of showing their song-writing skills, but the voiced tracks have a harder drive to their animosity.
If you find yourself craving some sludgy doom that blares out with little worry of whether their sounds might scare weaker listeners, throw on some Whorehouse Massacre, see how it grabs you, and if you dig it, be sure not to miss the release of their full album.
~ Gabriel

For Fans Of;    Fleshpress, Heavydeath, Moloch, Valtiel, The Wounded Kings