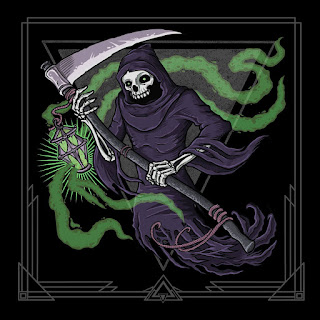 Coming together to release this split through Failure Records & Tapes, The Mound Builders and Pale Horseman have joined their distinctive sounds for two tracks each of doom-laden tunes to throw a spanner in the works of the usual Record Store Day pop appeal fare.
The Mound Builders take the A-side, dedicated to the memory of former band-mate Nate Malher, and start things off with the slow-mounting intensity of "Hashashin", growing layers of instrumentation and pedal effects before erupting into full-bodied slams of chords, beats, and vocals loaded with anger.  Classic-sounding riffs pull things along with serrated hooks, some special studio-work adds touches of mystery, and a raging crescendo cranks into increased bass presence before drifting away.  "Black Drink Ritual" picks up from there, holding the bass out a bit more in the mix, but picking up tempo for intermittent headbang speeds and a smasher of a finish.
Over on Pale Horseman's side, "Ghosts of the Gallows" lumbers into action on the strength of a heavy lead riff, twisted and expanded through the song at comparatively slower speed, though they make up for that by bringing a stormy presence.  The group's style is augmented by Dennis Pleckham's work at the mixing-board, bringing some bonus value to careful listeners who want to directly compare his style to that of Dan Precision's on the A-side.  After the thick grooves of PH's first track are concluded, "Long Way Down" brings up the heat with some sludgier style, complemented by increased gnarl and snarl in the vocals and tighter squeeze on the strings.
Across the four tracks, there's a nice spread of dirty-sounding doom, with very little tongue-in-cheek attitude to make these pills easier to swallow.  This is a set of tunes intended for days when you're feeling like shit, and want to hear something to let you know there's things to do with that feeling beyond wallowing in it.  Get in touch with your local record store and tell them to stock some copies for RSD, pop it on when the mood is right, and soak up some bad vibes.
~ Gabriel

For Fans Of;    Dead Existence, R.O.L.F., Shrine of the Serpent, The Wounded Kings, Zeppheroin