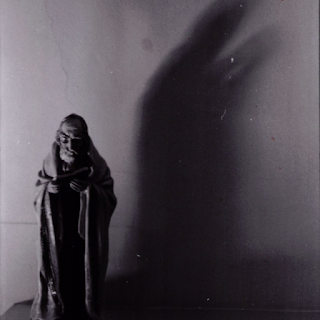 Coming from Santa Rosa, CA, with their first public demo, the quartet of Ghost Witch offer up a pair of tracks with astral themes recorded direct from the group's practice space.  As a result, there's some rawness to the experience, but that gives things a nicely authentic vibe.  With distant vocals calling their way up from the slabby masses of bass and fuzz, drums thumping their way along, and big riffs shoving their way along, Ghost Witch make a nice introduction for themselves.  There's also some synth/keyboard touches in the quieter sections, giving those parts a more overt connection to the starry song titles, something I hope will be expanded on with subsequent releases.
Though it's a short ride, it's a fun one, and Ghost Witch show that they've got the chops and creativity to make some solid stoner doom happen.  Check 'em out, and if you happen to be in the nearby Californian region, give the group support by attending any live shows they might have in the near future.
~ Gabriel