Beyond Perception - Blood and Whiskey (2010) 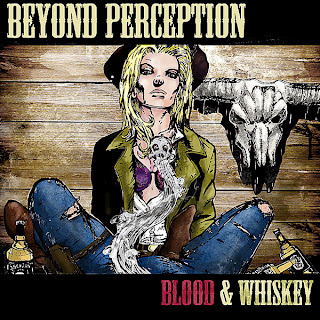 “It’s 106 miles to Chicago, we got a full tank of gas, half a pack of cigarettes, it’s dark and we’re wearing sunglasses. Hit it.” This album had me at the point at which the opening sample from the Blues Brothers movie dropped into the rolling riff for ‘By the power of the engine’. When we actually get into the music, we get a big stoner sound, dominated by a pounding rhythm section and singer Panos’ gruff shouting vocal. It’s a lovely sound, crossing over between desert, stoner, southern metal and even touches of hardcore to the barked vocals. There are some chunky chugging riffs that wouldn’t feel out of place on a hardcore record as well – imagine a Hatebreed album played at 33 rpm rather than 45 and you’re not far off. ‘Bud Spencer’ manages to push the buttons that make me pull what an ex used to call my ‘metal frown’ – slow paced chugging detuned riffage with a slow pounding drum part that just crushes. ‘Thorn’ plays into my current fetish for despondent acoustic blues, complete with slide, authentic vinyl crackle and a plaintive lament of “Evil in my soul”, which is a nice reprieve before ‘Send the Demons Away’ gives you another kicking. Closer ‘Dust’ sounds like it should have borrowed a Crowbar riff here and there, veering into sludge territory.

It’s hard to pick fault with this album as a whole. I have my picky qualms, personally the bass sound is too twangy for half the record which sets my teeth on edge a bit, but that’s probably just because I’m a bass player and therefore have very fixed ideas on what bass should sound like. As a collection of songs, the record is very consistent, delivering the spacious sound that you’d expect from this style, layering on chugging guitars and precise, if sparse drumming. The riffs are inventive and interesting without deviating too far from the blueprint, focussing on groove. For example, the anchor riff for the charmingly titled ‘Million Earning Whore’ is a great bastard of a groove, accented in 4/4 with a soaring roared vocal over the top. It typifies the album, not really breaking any new ground, but doing what it does very well. Definitely worth a look, and a real positive addition to the scene.