More Than A Masacre... 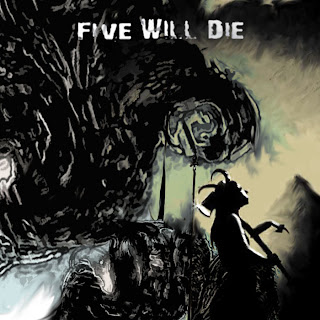 Time for something a little heavy. Well, when I say 'heavy' I mean biblically heavy. Like oil tanker full of lead kind of heavy.
The best way to listen to this album is exactly how I am right now; late at night and full of Jägermeister. It's dark, it's doomy and it's angry as sin. Now a lot of the time those traits seem to be synonymous with being slow and repetitive and generally tedious, but thank god these guys haven't jumped on that band wagon. Yeah, it sits on the fence between doom and sludge but it's so much more than that. It's got way more texture and tone than any other recording of a similar ilk I've heard in quite some time. Brain twistingly brutal vocals and dirty down tuned churning riffs paint a bleak and sordid sonic picture. But FWD don't just leave it there. They amalgamate it all with a nice ambient touch that rounds off the whole affair with great effect. The tempo also picks up here and there too which stops the record from falling into a rut and progressively sounding stale and old. Something many similar bands have failed to pick up on.
Check this band out and watch this space because they'll be giving us a full album next month. If you can't wait until then though hit follow the link below for a sample of their EP or just cut out the middle man and head over to their site and buy it on and awesome combination USB stick/bottle opener!... How genius is that!?