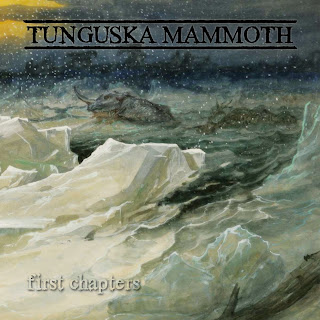 Big fat slabs of Canadian stoner metal for you lovely people today. Max from the band hit me up with an email asking for a review and from just one look at the artwork I happily obliged. Look at it! How could I not?!
As the old adage goes 'man cannot live on bread alone'. The same it true in the world of music, you've gotta mix it up from time to time. Fortunately its seems as though these guys agree. Fusing a mix of well executed metal, stoner rock and a touch of hardcore, Tunguska Mammoth sure hit the 'unique' nail square on the head. Now I'm not a big hardcore fan by any stretch but straight out the gates they've managed to utilise it elements in such away that its completely won me over. Big growling and screaming vocals backed with massive beats and aptly mammoth riffs make for one hell of a debut. There's also moments that flash with the likes of Amorphis's style of fantasy space rock and even similarities to Unsane's Chris Spencer's vocals - That deep full frontal angry assault. That may sound like a bit of a unorthodox clash of styles but it all works, and works really well to boot.
There's no doubt in my mind these guys are going to be big. Just this 3 track EP alone blows most of the recent full length releases of similar mainstream bands out of the water. On the face of it that may sound like a bit of a bold statement but go listen for yourself. Trust me, this band are epic. I also demand that they get back in the studio and give me a full length album!... Go on... Go!

For Fans Of; Mastodon, The Sword, Black Cobra, High On Fire, In Flames