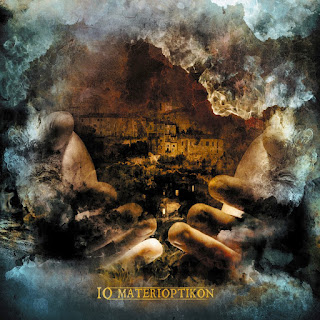 Post metal. Or as one of my friends calls it “one of the things Isis have to be sorry for”. Now, if you agree with my friend, you might as well stop reading this review now – iO probably will not be for you.

‘Materioptikon’ is named after (I’m reliably informed) a device created by Doctor Destiny in order to create reality from the fabric of dreams. To be fair I was also reliably informed that the aforementioned Doctor Destiny’s mother was named Ethel, which seems slightly incongruous, so I’m not sure how true that is. Anyway, I digress. This is Birmingham based iO’s second full length album, following 2007’s instrumental ‘Monolith’ album. The new record brings several new touches, most notably the presence of some vocals, some subtly layered synths and a pretty huge leap in song writing progression.

‘Monolith’ was a fine record, with some lovely twists and turns, however it wore its influences slightly too proudly on it’s arm. Through the writing of this record iO have found their own voice and branched away from their influences to staggering effect. The colossal sludgy opening riff to ‘Five Ton Man’, drenched in feedback and strong but sparsely used hardcore-influenced vocals before breaking into a staccato riff, is a powerful statement of intent for a record. And there are some huge riffs on display here, the anchor riff to ‘It was only a Dress Rehearsal’ manages to be melodic and crushing at the same time and ‘If you don’t trust me, trust my Beretta’ has a riff that could be the offspring of a Crowbar / Helmet rutting, as weird as that sounds. But it’s the quieter sections where the band really shines, layering and building quiet progressions into epic sounds. ‘Breathe in the Sea’ is a good example of this, subtle guitar tones and synth effects layering over the course of the song, building a sparse template into something huge, so that when the big riff at the end finally lands it almost is too much to bear.

However, the best is saved for last with ‘This is where the cat lives’. Quite apart from having one of my favourite song titles of recent times, it is a prime example of delicate progression leading to a memorable song. It has almost a positive lilt to it, layering in clean guitars before the distortion breaks. Reverb and delay soaked guitar lines dance around the core band throughout. It’s just beautiful, one of the best examples of why post-rock should have shacked up with metal in the first place.

Slightly boring, I know, but probably should say that the production is sparkling throughout and the packaging on the EP is particularly stunning. Another reason to go and buy a copy of the album, really. Oh, and then buy ‘Monolith’. And then go and see them live.

Possibly buy them a drink too, they are lovely guys.


For Fans Of; Isis, Russian Circles, Mogwai, Mouth Of The Architect, Minsk