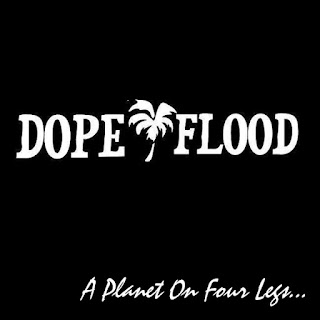 Struth, since discovering the awesome Planet Of Zeus I've been blitzed with emails from similar bands also hailing from Greece. It's pretty great too, as every band has been completely dripping with quality. No shoddy demo's, rushed EP's or blatant rip off's of other bands, just pure unadulterated quality. So when I received an email from Cris and the guys in Dope Flood I was pretty eager to heard what they could do.
As it seems, they can produce and master the hell out of a recording! The demo's only 3 tracks but they sure haven't skimped on the effort. Manolis has one hell of a rock voice similar to that of Layne Staley of Alice In Chains. Admittedly not a band I ever really warmed to that much, but with that style of vocals fused with a Crowbar/Kyuss/Zakk Wylde mix of heavy riffage, it sure has won me over. The guys sure do have talent and I can't wait to hear a full length album.