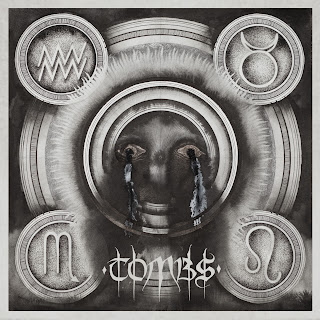 You would not believe the effort it takes sometimes to review an album. Specifically in this case we didn’t get off to a good start when I couldn’t even get the damn CD out of the case – apparently the case had melted shut on the journey to my house. Random, and ironic given the frosty majesty of the music that Tombs generate. Anyway, five minutes of swearing and wangling with a knife and here we are, ready to go. First impressions are that the band have moved on since 2008’s ‘Winter Hours’, bringing a new level of dissonance and channelling Neurosis circa ‘Times of Grace’ far more than previously. In fact this is by far the best comparison I could give. Chugging riffs, mournful gruff vocals, tribal influenced drumming and a guitar sound so rough and grind-y that you could sand 2x4’s with it. Touches of extreme, almost black metal, including blast beats, turn up in ‘Black hole of summer’ and ‘Red Shadows’ to devastating effect, magnifying the impact of the doomy passages tenfold.

The production on the album is great – in that it sounds as noisy and dirty as possible whilst still enabling all of the instruments to be heard clearly. It’s a cacophonous noise which should be heard by everyone with a taste for the heavy, intelligent music.