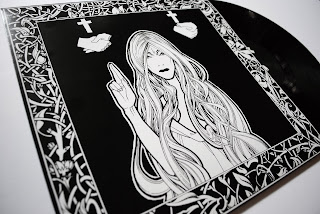 I really wish I'd properly discovered this band before they split just recently. I'm kicking my self now!

You could quite easily take a glance at the cover and name then pigeon hole this band along side the many other shambolic death/black metal bands that pop up every now and then. But hold your horses, as appearances can be very deceiving...
I will confess that when I put this record on and was met with the 5 minutes of ambient fuzz and organs of the opening track I initially felt a little disheartened. But then when that gives away to the powering, catchy riffs, thumping bass and crashing symbols all past judgements instantly fly out the window. Theres no vocals to speak of, but that doesn't really take away from the enjoyment. It merely gives them the adage of being compared to a vocal-less Electric Wizard or a slightly less biting yet more trippy Karma To Burn.
It's kind of strange, as on the face of things Mountain Witch don't look entirely like you expect them to sound. Theres a definite influx of sludge and doom running through the entirety of the album but its composition and the way its produced lends itself towards a classic psych and slightly desert/southern rock sounding angle. It's a short but impressive little release and something I reckon 99% of you will really dig. Which is why I've also put a link to their first album and predecessor to this; Scythe & Dead Horse. An record which I am desperately searching for on wax.

I really hope the guys can reform a similar incarnation and produce more material because it would be a bloody waste if they didn't!