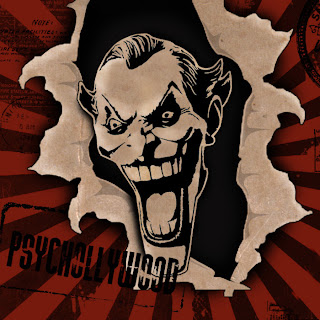 Ready for some hard rock from Poland?...
Thats a rhetorical question because today thats what you're getting.
I'll admit, I wasn't too sure what to make of Psychollywood when I first put the album on. Their bold sound of hard rock with elements of some 80's hair metal, a touch of blues and a sprinkle of dirty southern rock kind of conflicted me a little. But the more I listen to the album the more I find. It's pretty amazing, things pop to the surface that you didn't notice previously on every listen. Like the mix of chugging riffs and harmonica at the same time... Hell, I didn't even know they had harmonicas in Poland! But its those relatively simple things like that which give this record its character, along with its awesome production. The guys have clearly parted with a lot of time and money to get this thing over the finish line.
But what exactly do these guys sound like? Well, believe it or not at times it sounds like Eddie Vedder fronting Orange Goblin and in other moments it kind of sounds like Foo Fighters waring with Maylene & The Sons Of Disaster. There's a real 80's kinda reflection around some of the brief guitar solos and certain 90's something about the vocals then a truly modern touch thrown into the mix with the southern rock style riffs. It's like being time machine, I love it! It mite not initially sound like it would be up everyone's street, but I sure dig it. It's got such a vast amount of influences sewn into it I can pretty much guarantee there would be something there for everyone. Besides, the guys were awesome enough to let us put the whole album up for a free download so why the hell not check it out for yourself. If you're like me and can occasionally loose interest before the first song's even half way through, don't! Just have a listen to the tracks like 'Black Fly' or 'Boarderline'... The epic opening riffs with definitely keep you hooked. In fact I will actually go to the trouble of making a video to put on our YouTube page and post it below just to prove my point!
~ Jay
For Fans Of; Maylene & The Sons Of Disaster, Gentlemans Pistols, Foo Fighters, Guns N Roses, Pearl Jam
Website • Myspace • Facebook • Bandcamp
Psychollywood (320kbps)