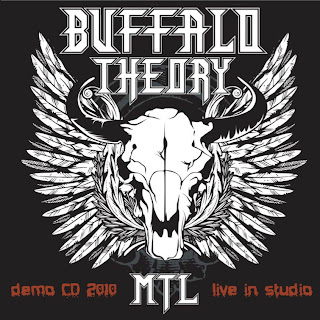 Since putting up the awesome Tunguska Mammoth last week I've been swamped with Canadian bands emailing me with some seriously great material. It's just completely reaffirmed my knowledge that Canada is awesome and I really should be living there. I think this is the 3rd band in and I've still got about 3 more to come...

Straight off the bat these guys prove they are more than capable of rocking the living hell out of good old traditional metal riff. Plain and simple. The opening track 'Lost' sounds like you're playing KISS at 33 rpm when it should be spinning at 45. What better opening than that!? It practically grabs you by the nuts and convinces you to keep listening. Its got that certain groove, those deep gravelly vocals and sustain that I usually attribute to the likes of The Sword and similar acts. It's a simple formula that so many great bands have and still use as their foundations and like most people, I love that upbeat old school metal sound. Yeah it's been around for decades now and sure it often feels stale and like its all been done and heard before. But the Theory have some how managed to make it sound new a fresh without stretching it to the point of reinvention. If I'm entirely honest I'm quite amazed and pretty astounded because I can't quite put my finger on what exactly is different. I've been racking my mind for hours and just drawn a blank... But then, what does it matter? It works, thats more than enough lets just be happy with that. Its got all the things you want... Its chock full of big fat riffs and biblically catchy licks that will get your foot tapping a head bobbing. Thats what metal is suppose to do, thats its purpose. It doesn't have to be ridiculously fast, painfully heavy or be wearing a friggin' mask or make up, it just has make you wanna get in the pit and start slamming bodies... and by god these guys make me wanna do just that!