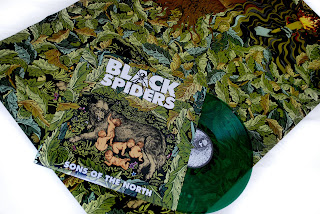 It's been a little while since I brought you a good old vinyl review so I thought I'd scour my shelves and see if the was anything I'd missed. No sooner than I'd got to the 'B' section than I realised I'd completely forgotten about these chaps. Pretty shambolic of me really as they've been taking the scene by storm over here for a while now. Hand picked by Ozzy himself to open for him and added to the Ozzfest lineup the guys have also been given high praise from Duff McKagan as well as every magazine over here who have reviewed any of their EP's or this latest offering.
Now thats a fair amount of hype to live up to, especially for a quartet from rainy old Sheffield in the north of England. But theres no need to beat around the bush here, they do live up to it, and then some...
So what can you expect exactly? Well, think of the definition of rock and roll... Thats pretty much it. Hard rock with thumping, jaw dropping riffs, lyrics about alcohol, women and being by killed by KISS and smattering of classic 80's lead breaks. I know the latter there may put some of you off, especially if you're like me and can't stand the recent influx of hair metal glam bollocks 25 years too late. But, and this is a big but, Black Spiders are far from this. Imagine The Sword covering Turbonegro songs done in a similar style to The Datsuns... Yup, seriously thats what this album sounds like. It's bloody awesome!
Go over to their website and pick this vinyl up, and why not while you're there grab one of their awesome shirts... You know you want to.

For Fans Of; Gentlemans Pistols, The Datsun, The Subways, The Sword, Motorcity Daredevils
Website • Myspace • Facebook • iTunes
Sons Of The North (320kbps)