Blame It On The Chronic... 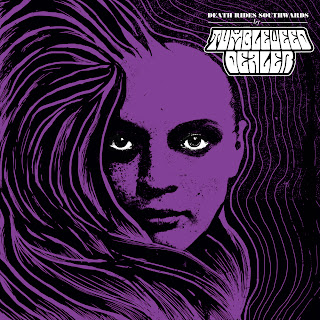 Boasting a name more worthy than most for playing stoner rock, Tumbleweed Dealer actually play a pretty unique mix of 70's inspired psych infused with modern stoner, desert and even a subtle hint of post rock. But forget that for the moment, lets give you the guys background...
Sometime in June of 2012, Seb Painchaud (member of The Last Felony, former member of Ion Dissonance, Nefastus Dies & Vatican) decided to indulge in the greeny goodness for the first time in years. Never one to do anything half way, in a few hours a three and half was turned into smoke and the inspiration hit him. He decided to write and record right then and there on his home studio some tracks inspired by bands like Earth and Horseback. Three songs were created that night and the following night he went at it again, creating two more songs, this time incorporating post-rock and math-rock influences. A few weeks went by, and the inspiration hit again and Seb, who had now returned to his old chronic self of yore, wrote and recorded a few more songs. All these songs were rough demos with simple drum loops and never meant for public consumption, but when he wrote and recorded Death Rides Southwards, he knew he had something. He knew he had found his sound.
In another drug filled evening with good friend and fellow The Last Felony band member Felix Roberge we’re rocking the tracks and decided to combine their efforts, and Felix would take over drum programming and supervise Seb’s hectic and drug laden recording sessions. Out of this collaboration came this Death Rides Southwards EP. Now the band is in the midst of recording its first full length album, entitled Dirt, once again in their home studio, and plan to release it and start doing the live rounds in early 2013. The guys have also now recruited Vincent Houde of Dopethrone as their drummer for both live shows and studio, and swear to keep drum tracks as is and avoid the over-editing that is plaguing the music scene these days.