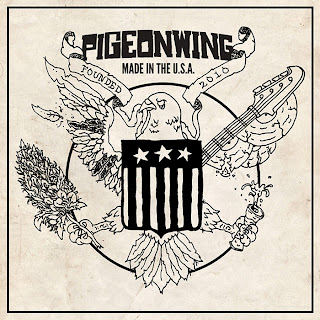 You ever notice how some (most) bass players kind of just play along with the guitarist and are so fucking boring you’d rather watch the fat ass fall down a hill? Just because the thing has four strings doesn’t make it any less interesting than a guitar. Don’t get me wrong bass culture is just as bad if not worse than guitar culture, who the fuck wants to see some dick with a ponytail play a 40 string bass in a hawaiian shirt that’s more out of date than hardcore? It’s not the bass that is boring it’s the player. Quit playing, get that job at yelp and sell your 8x10 to someone who will use it properly. Pigeonwing is a two piece. Bass and drums, but I didn’t even know it until I saw them in Long Beach. I have nothing but good things to say about this band and the two dudes in it. They destroy. They released one twenty minute song entitled, “***”. They really should have titled it, “( . )( . )” cause you can’t verbalize the first and the second one is funny. Get it? Those are digital boobs. Anyways, this song meanders through distorted and crushing bass riffs similar to Thrones. Not dependent on vocals, they come in every now and then, but when they do they are angry and mean. I remember seeing them live and as Ryan expelled his beer fueled anger, in came Ricky with overwhelming drawn out eyes closed cries that just added more to the glory of this two piece. Not only do they use all their limbs to make this crushing music, but they use all of their mouths too. This album rides on the bass. Listen to that crunchy tone, the ominous feedback, the brutal riffage; you can feel it deep inside you when you see them live. Deep inside. And the drums are blatantly crushing with no bullshit. I don’t know how his set can take such a beating show after show. His skins take a harsher beating then white people on a basketball court. These guys clearly know what they are doing and take care of their business, DIY, and on top of their shit. Call these guys up if you want to play in Long Beach. Pigeonwing is playing the Southwest Terror Fest this month and they are the number one band I want to see. See you guys soon. Thanks again for letting us smoke your weed and play Mortal Kombat.
~ Brett