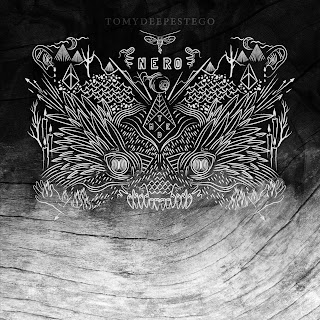 These days it's pretty easy to just pitch a band into the good old post metal genre and more or less just forget about them. Many of the bands that dip their feet in this genre are often seen as being pretty abundant and most stick quite rigidly to the same old tried and test formular. Now I dont know about you, but this is kinda wearing thin on me these days. But fear not, ToMyDeepestEgo are here to throw a little something else into the pot, with this, their third album Nero.
Hailing from Rome, the five chaps have all but stripped the post metal ethos down to its bare bones and rebuilt it in their own idealistic view. Some of you die hard enthusiasts may well be dubious about this or even cry 'heathens', but just hold fire. With a reverberating uncanny likeness to Pelican (for me their closest comparison on this album) ToMyDeepestEgo have given themselves just that little bit more play to step either side of the mark. Giving a slightly more dark yet less disjointed ferocity in the highs and an altogether brighter melancholy in the low ambiences. Swaying from an almost sludge like sound and composition to a softer near shoegaze like harmonic in a matter of seconds, Nero flows through a myriad of elements with a near perfect execution. Where for some it may not be quite as satisfying as throwing on such similar classic albums like What We All Come To Need, Oceanic or even Geneva it still reeks of a certain talent, skill and vision that few outside of the well knowns even come close too.
~Jay