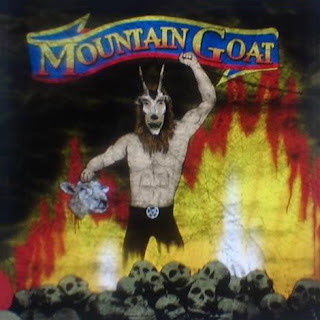 An extra special hot off the press Saturday Review for you guys today. Yup, I deemed it that important that I bring you this album asap!
Now, I know some of you have been awaiting this moment for quite some time, some may have even already got your hands on it, but for those completely oblivious... Oh boy do I have a treat for you.
For those of you not akin to the mighty Mountain Goat, just do your best to pull yourself away from the stunning artwork for one moment. What these guys may lack in classic album cover design they more than make up for in the ability to grind out mind bendingly awesome fuzz filled carnage. Teasing us for the last year and a half with just three EP's the Michigan trio benchmark to date has been their limited edition two track 7" Smoke Filled Land which became an instant underground hit and consequently became like rocking horse shit to find. Rightly so too. The classic combination of weed, groove, overdrive and DIY recording made it an absolutely blinding listen. Like a explosion of Eyehategod and Electric Wizard, the vinyl really cemented the band's status as potential giant killers.
So with such and impressive collection of pre album releases could the bands history really be their undoing here?... No, is the answer to that question. Well, 'hell no!' would be more accurate to be fair. Not a single shred of form has been lost or compromised throughout the entirety of the 46 minute runtime of this little beauty. Comprising of the guy's same well honed ethos of distant sounding vocals, churning riffs and more fuzz than you can shake a bong at, this new offering also strives to cover new ground. Going straight for the jugular, the angry uncompromising growling and rumbling through the first three tracks really adds a great sludge aspect to the bands virtuosity, not to mention the fact that echoes so vividly of the late great Iron Monkey to boot. If thats not a shining recommendation, I don't know what is. But just like the Monkey, and many others, elements of the classic sludge inspiring punk years are also apparent in tracks like Live Fast Or Die Drunk and Rites & Rituals. The real kicker for me though, and one of the really stand out elements of this album is the absolutely killer execution of the closing track Space. A 15 minute weed infused orgy of psych, space and doom style guitar taming in a tuning so low it rattles the very gates of hell.
It's been long anticipated, and where that can often be a band's Achilles heel, not here. Nope, Mountain Goat once again don't even slightly fail to hit the mark. In fact, I'd go as far as to say that if you label yourself a fan of the genre and you don't dig this album you may as well just put a shotgun in your mouth and try and pull the trigger with your toe, because it really doesn't get much better than this.
As soon as I get off my ass and update our top releases for 2012, this little beauty is gonna be slapped right up there. In the meantime please please please give the guy's a hand and pitch them a few bucks, if not for this worthwhile gem, then via their Big Cartel page, as if they can raise enough we could be seeing this get an outing on wax!
~ Jay