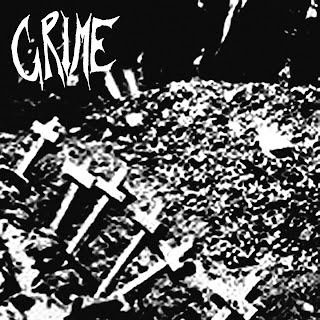 How many of you hippies have watched the Wizard of Oz with Pink Floyd playing over it? So trippy or whatever huh? I did this once at a party when I was sixteen only cause I didn’t know how to talk to girls. I was that skinny awkward fucker on the couch at a party watching a movie, and I wasn’t even high. Nor drunk might I add. So here’s the new thing to do. Listen to Grime, the sludge band, while watching a Grimes video. Why the fuck are her videos so dark and more importantly why do people give a shit? All the attention should be on Grime. Evil as Satan raping a child, and more distorted than a creationist’s worldview, Grime brings that gritty evil doer sludge and delivers an amazing six track self titled album. One thing that I don’t hear too much is bass that is just as distorted as the guitars. Why should any sludge be played clean? It shouldn’t. Their instruments are so distorted and dropped tuned their strings probably flop around like wet spaghetti. As for the vocals, they don’t give up, even as they other members are keeping that slow churning sludge at bay the vocalist keeps it hitting strong. I imagine his blood shot eyes are exploding from his head and redder than from hitting that bong shaped like inverted cross by the end of their set.
~ Brett