Battles with Winged Angels from Hell 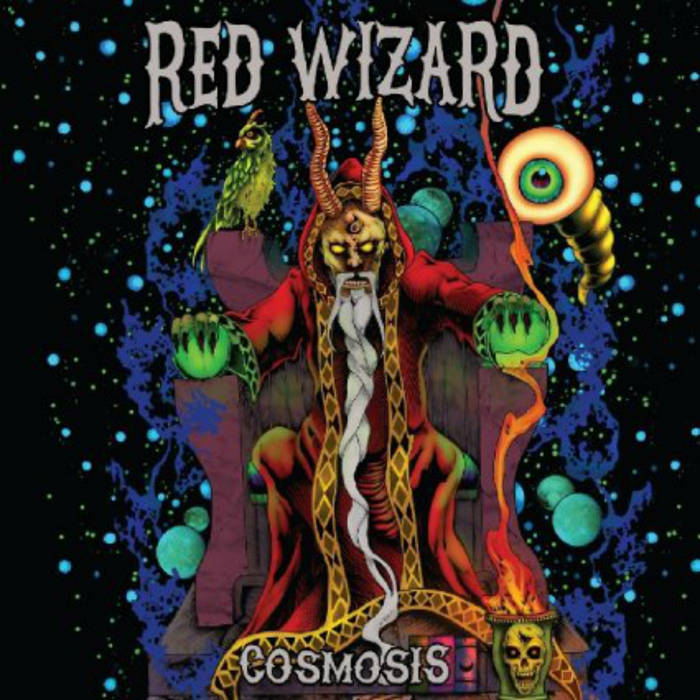 Red Wizard are a Satanic-themed band of five disciples, as they like to be called, consisting of Travis Baucum on vocals and harmonica, Miles Von Ricketson on lead guitar, Casey Lamontagne on guitar, David Wilburn on bass and Shane Kepler on drums, all five hailing from San Diego, California.  Their first release, a self-titled EP linked below and released in 2014, is a stellar beginning, but here on their debut LP, Cosmosis, they have created a signature heavy psyched-out, stoner, doomy tale of hate and destruction.
Starting out, we have "Tides of War" with a pummeling bass chord with lyrics that hold me in every word about following about a pact to meet in the promised land to obtain control over the landscape.  Thus begins, now I know some bands hate this, but, a classic stoner concept album about a deal with some nefarious power and how that builds and builds until the bitter end. Reading the second track "Temple of Tennitus" sent a smile over my face.  As a frequenter or many metal shows I can tell you first hand 'tinnitus' is something that crosses my mind when certain amplifiers, namely Maverick or Sunn O)), are anywhere to be seen, and this song strums almost attempting to leave the listener with a ringing in their ears that last for days.  The track "Cosmosis" is my personal favorite.  It begins with gnarly chords made for head-banging glory, and then quickly begins an amazing groove.   The whole track is a perfect mix of all of the band's talents with enough to keep me on the edge of my seat for the entire ten minutes of slow tension-filled doom.  The final three songs are woven together as "The Red Wizard Suite Parts 1, 2, and 3".  Part 1 howls with a tale of supernatural murder where Satan is called upon by our antagonist to lay to rest any unwise enough to fight against him.  Part 2 is the instrumental track to flow brilliantly into Part 3, where complete power is obtained with lyrics pleading for anyone to run and hide to avoid a merciless death by our Red Wizard.  Hell has been brought to earth in this record, a bloody treat filled with threats of a promise that will be fulfilled.
One more thing I have to mention is the cover art that is the epitome of what wizard rock should look like and what you're in for.
~Richard
For Fans Of: Electric Wizard, Merlin, Sleep, Black Sabbath, Uncle Acid and the Deadbeats