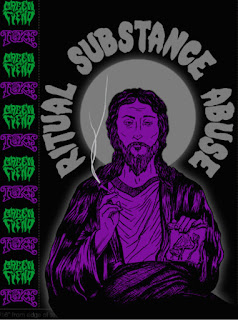 Teaming up two groups from North Carolina, and delivering two tracks from each, this split of stoner-toned heaviness (as if you couldn't guess from the band names, release name, and artwork) bubbles into action with a sound highly familiar to its target demographic before launching into the hard, chunky riffs.  Green Fiend take the A-side with "Purge", a blistering heavy-tear ride through extra-tuneful riffs and swampy bass menace; and "Cocaine", which lays out a more traditional BSabbath-influenced lick before giving J.J. Cale's classic tune a thoroughly sludgy treatment.
Over on the B-side, Toke pack "Four Hours For Hours", a low-swinging doomy track with some sludge to the vocals and guitar tone, throwing in some rougher breakdowns before its end; and "Legalize Sin", a stormer with what some might hear as DNA from Weedeater's meaner moments flowing through its beats, riffage, and howl-growls.
Good licks to both sides, room for some instrumental exploration, and rhythms to get your body swaying along make this a good set of tracks for those looking to get introduced to either band, and while the original mercury silver cassette run has already sold out, there's rumors of a vinyl pressing in the works, so keep your ears tuned for chances to pre-order that.  In the mean-time, you can snag digital copies of the tracks from the respective BandCamps of the two groups, so get on that if you're in the mood for some dirty, hard-edged stoner doom.
~ Gabriel