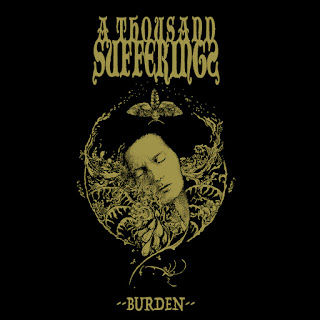 Coming to us from the Russian label of Satanath Records, this album is the first from the Belgian quartet of A Thousand Sufferings.  Not letting that hamper their ambitions any, they've put together a solid concept to the album, one which deals in tying colors to emotional states.
To start things off, there's the intro track "Once in a Blue Moon", providing a few minutes of sonic warm-up to slide listeners into the right mood by way of distorted spoken-word and subtle atmospherics.  Once the moodiness is set, the stability crumbles into rasp-edged blackened doom, with carefully raw production helping the bash of drums, saw-toothed guitar, and harsh vocals take things over in "Red Is Redemption (Bloodletting)".  Picking their way through snarling griminess as well as more melodic sections, the group establishes their sound while making clear that they'll continue to change and rework it for the rest of the album.
"Black Is Burden (Lamentation)" carries on from the aching end of "Bloodletting", bringing up the traditional doom levels while speeding up the beats, and integrating black metal tremolo in the second half.  Lastly, the album's longest song, "Blue Is… (Remembering Treasures)" takes a thunderous path through misery and desolation to reach its finale.  Shifting like a slow kaleidoscope through the facets of their musical blend, ATS conclude the album with a well-done summation, and exit the album on a high note.  Fans of blackened doom, be sure to check this band out, and keep an ear tuned for further releases (they've already got a new live track recorded, so hopefully an EP or something similar isn't too far off).  You can pick up the CD at Satanath Records' BandCamp, or get the digital version (or a T-shirt, or tank-top) over at the band's BandCamp.
~ Gabriel