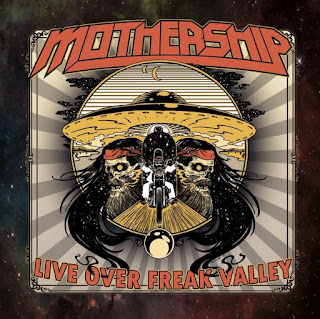 The raw energy of great rock 'n' roll can be a hard thing to capture on tape.  Many of the great rock bands are as famed for their live shows than their studio material (if not more), irregardless of the quality of those albums.  And yet, for so many bands, live albums are a hard thing to get right.  Perhaps the sheer dynamism of a scorching rock titan is too much for the limits of the recorded album, but many great bands and concerts have sounded less than scintillating when played back at home.  By the same flip of the coin, when live albums work they can show a ecstatic explosion of energy that is almost impossible to produce in a studio environment.
Thankfully for both fans and newcomers (of which I am one), Mothership's Live From Freak Valley is one of those live records that not only does justice to a furious rock 'n' roll monster, but gives the band an energy that really can't be captured outside of the live environment.  The six-minute swirl of high-energy rock that makes up the opener, "Hallucination", is the sort of joyous revelry in noise that defies critics by battering them into submission.  It's almost impossible not to be swept up in the excitement of no-BS rock of "Lunar Master" and "Cosmic Rain".
Audience interaction walks a fine and effective line between atmosphere-building and indulgence.  If too gratuitous, audience interaction can be great at the show but dull when listening at home.  Mothership strike it just right here though as shouts of "Hello Freak Valley!" convey enough of a sense of excitement to enhance the album but are brief enough that they never get in the way of the music.
Another common pitfall of the live album is poor mixing and, again, it's one that Mothership traverse safely.  Vocals are clear in the mix, with both bass and guitar occupying their own space.  The drums are clear and well-mic'd.  It seems simple on paper but far too many good live albums are crippled by poor production.
Mothership manage to tick all the boxes with Live Over Freak Valley.  Negative criticism, if there is any, would be more with the songs than the live format itself, which the band execute very ably.  The songs they play perhaps won't win any award for originality, but if that's their only flaw, then they're doing pretty good.
Live Over Freak Valley is an album of well crafted, infectious rock songs that, had they been recorded a few decades ago, may now be revered as classics by many.  It doesn't push the boundaries, but it's great at what it does.
~ Martin