Higher Than The Sun... 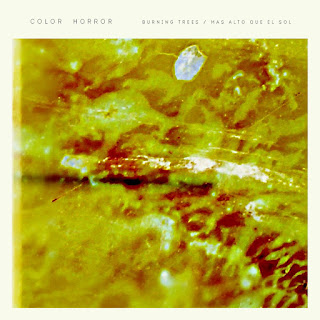 Way way back in 2010 while trawling through the usual avenues I stumbled upon an absolute gem by a little band from Uruguay by the name of Ufesas. These guys were awesome. Right from the opening riffs of The Destroyer, the opening track of their initial debut, they buzzed, hummed and fuzzed a solid LoFi mix of gritty rock and roll and traditional desert psych. The following year the band recorded their first full length self titled album which had been penned to have been released on the now sadly defunct Droehnhaus label, who'd previously put out the first two Mountain Witch releases. Even going as far as having the LP's artwork fully mocked up, which strangely I still have a copy of somewhere. Alas, the physical release never came to fruition, but you can still download the album for free here, and I strongly urge you to do so.
So cut to this week and I get dropped an email out of the blue from former guitarist Leandro, telling me that three of the members have a new band. So, with much excitement, ladies and gents, I give you Color Horror...
Taking many of the aspects they picked up in their previous incarnation Color Horror really share much of the same vibe as the illusive Ufesas self titled, which was to be expected. Besides, why change a winning formula? Right from the get go the guys lay down exactly what you can expect from the rest of the album. Opening track Más Alto Que El Sol bares all the hallmarks of classic desert psych, while at the same time echoing a certain something of The Doors. Despite having listened to the song 14 times now, I'm still unsure exactly what it is about it. Either way, I reckon they could easily pull off a cover of Riders On The Storm. I think it's the trippy blues influenced psych that they have in common. I am glad to hear that that haven't strayed too far from they're heavy garage rock roots though, at least based on a cursory listen to the second track, Burning Trees. It's a slightly rawer take on their psych approach, etched with a heavy blues tone a bit like Hanni El Khatib and some of the early Black Mountain releases. Either way, it works, and works well. But enough of my rambling, go hear for yourself and be the judge. While free to download, I'm afraid you're gonna have to wait until a little later in the year for the full length album.
~ Jay