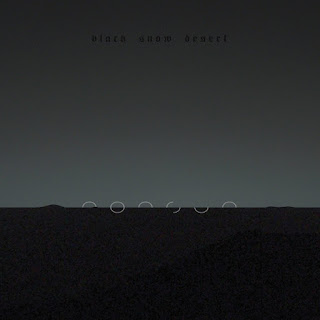 Running almost 90 minutes, this third album from the Ukrainian duo of Nonsun is ambitious in many ways, from that daunting duration to the work put into making those lengthy tracks deliver some incredibly moody, heavy, and stark atmospheres, as well as crafting in moments of poignancy and pressurized aching.  Though the music moves slowly, for the most part, it rolls along with such weight behind its momentum that it's hard not to get caught up in the gravity generated by the massive presence, particularly with the way the notes at the end of one song will flow right into the start of the next (or silence into silence, as with "Peace of Decay, Joy of Collapse" into "Heart's Heavy Burden").
Each listener will have their own associations to go with the slow throbbing and echoing resonance, distant percussion, and peals of guitar tone, of course, but for me it pulled up images of lunar landscapes and ruined architecture.  Something about the somberness of the tones, even when the music was at its most brazen and metallic, feels so forlorn that the mood stays rooted in longing, rather than anger.  Picking apart the thoughts behind the music is difficult, and probably a big part of the appeal for relistening, but influences from drone, funeral doom, and (restrained) noise rock are evident in the heavy chords and crumbling tones, making this a nice gateway for anyone used to regular doom to test the waters.
Like deciphering the process behind building these tracks, weighing the album as a whole is difficult, and not just because of its length.  There's so much shape-shifting and subtle orchestration at play that even tracing one song's route from start to finish is a challenge without abstracting away key moments, allowing this to be one of those rare albums which actually makes true that old cliche of 'it has to be heard to be believed'.  So the next time you've got a couple of hours clear (gotta budget in some recovery time), and you're in the mood for some carefully-plotted doom and desolation, give this one a try.  Excellent stuff, expect to see this on my year-end Top 20 list.
~ Gabriel