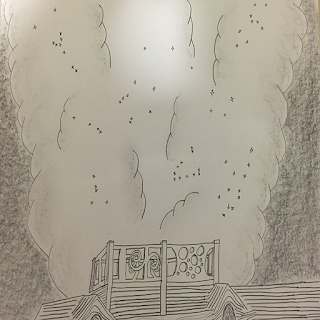 Coming to us from Boston, The Rococo Bang are a two-piece working guitar and drums, making the two-track nature of this EP all the more fitting.  Held by the EP are a pair of totally improvisational tracks from a live performance on the WEMF radio station, but despite the off-the-cuff nature, the songs present the band in a strong light.
First of the two tracks is "Abrams", which rolls out a slow build towards thick blankets of notes from the strings, layering over themselves as the song grows, gaining firmer distinction and heavier weight.  Pedal effects are present, but kept from overwhelming the focus on melody, and the drums work the space between back-beat and attention-grabbing quiet well.
Track two, "Guy Talking to Abrams", takes a similar approach, though it starts out slightly harder and shifts into more of a dreamy psychedelic mode with the guitar, trailing notes and slightly phasing or flanging the reverb for an interesting wobble effect.  Again, a lot of the charm comes from how the musicians work the melody into larger and larger form over the course of the song, but there's also a fair chunk of it coming from their care for each measure.
Despite the EP length, it's an engaging trip through the two songs, one which should linger in your ears after it abruptly cuts off.  Check it out, along with the group's other releases (all of which are up on their BandCamp), the next time you're in the mood for something spacy but heartfelt.
~ Gabriel