Truth In The Chords... 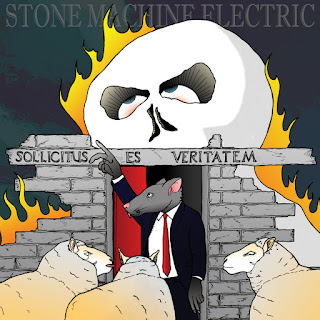 We last heard from this Texan two-piece with their EP The Amazing Terror back in November of last year, and they're back now with this five-track album to keep their heavy psych/stoner rock train rolling steady.
Opening with "I Am Fire" (a reprise version of which also closes the album), SME build atmosphere with a few minutes of slow warm-up, gradually increasing the throbbing bass presence with strains of tight strings before launching full on into the beats.  Kicked up another notch by the arrival of the vocals another minute later, the song hits full stride and pulls hard rhythms together to deliver its message of burning consumption.  With a smooth transition back into subtler harmonics, the duo carries momentum on into their next song, "Dreaming", with its understated main riff getting fleshed out more and more each time it cycles through its notes, growing to wild tears of notes and stone-speed shredding before letting the heaviness pull it back down to slower tempos and a thoughtful bridge.
From there, it's on into "PorR", holding on to some of the elements while weaving new arrangements and going deeper into psych territory.  Thicker, broader, and crunchier riffs pile up into craggy formations, gaining a light fuzz coating and tightly-used reverb/echo effects, with some even harder drags rising around the 10-minute mark.
"Demons" takes things from there to the last track, using careful signal interference and synth atmospherics to create a heavy but dream-like setting with guitar notes drifting in the haze and taking unpredictable turns towards sharpness.  "I Am Fire (Slightly Burned)" carries through to the very end with a return to the relative steadiness of the first song, something like surfacing from a bout of fitful sleep into tornado sirens.
Each song has its own energy explored thoroughly, making sure that they aren't lengthy just for show, but they also all fit together in a way that makes for an uncommonly cohesive album experience.  It's a strange ride, no doubt, but one that makes sense if you just go with its mad flow and savor each track's style in turn.  Strong stuff from Stone Machine Electric, and something with enough depth to it to keep plays fresh until their next batch of music hits the public.
~ Gabriel