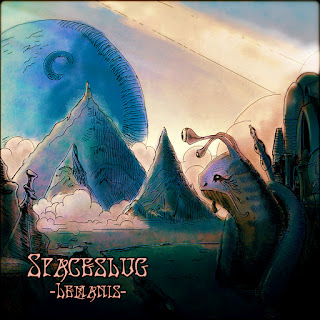 Anyone who's been following our reviews for a decent amount of time knows that we consider Poland to be one of the top countries around when it comes to doom, especially that of the stoner/psychedelic variety.  So when we were sent this debut album from the Polish trio of Spaceslug, tagged as "Heavy Space Doom", I was excited, to say the least, despite not really having a clue what the title meant.
And practically as soon as I had the album loaded up and hit play on the opening track, "Proton Lander", I felt justified in that excitement, as a thick wave of bass rolled right out with treacly strings warming up alongside it, and a leisurely drum-strut soon popped its head in.  As the song grew from this laid-back start to a heavier, harder, and headier space, picking up some powerful cymbal clangor on the way, I found myself grinning in anticipation of the rest of the trip.
Thick grooves, compelling riffs, and the sound of musicians losing themselves in their instrumental output were the soundtrack for the rest of the cruise, while track titles such as "Supermassive" and "Grand Orbiter" helped chart the star-bound atmosphere.  Kicking ass whether rolling slow or burning through some of the higher speeds, the album never once had me feeling bored or disengaged.
And, at the end of it all, after the title track ushered in the finale, I wanted more.  That's always a nice feeling with albums, but as this is the group's debut, it bodes well for future efforts (and hey, maybe we'll be lucky enough to get a split or EP in the time between now and their next full album).  Great stuff from start to finish, earmark this as one of the year's best.
~ Gabriel