Down By The Water... 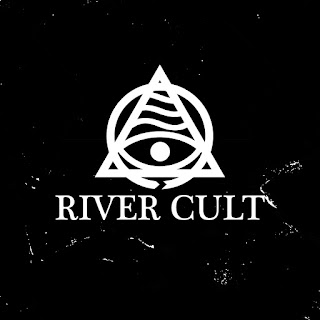 Located in Brooklyn, this trio of musicians have put together three tracks with which to introduce themselves to the world, and on this EP, those tracks share the group's style without hiding behind layers of gloss and over-production.  Instead, River Cult aim for immediate, fairly raw-sounding level of production, one which fits with their blending of garage rock and psychedelic doom, keeping the gritty roots exposed while the band focuses on the music.
And that focus delivers some great results, with long-curling riffs, slow-shift percussion, feedback to fuse your looser neurons, and a bluesy acceptance of the strange as they keep it all cooking.  Between the three tracks, the EP hits about half an hour in duration, and with that time, the group explores their unusual territory in fine detail, with results comparable to the free-trip excursions of the heavy psych bands from the '70s, enough to raise goosebumps as they fuse their instrumental output in ways that seem both improvisational and totally in-tune with each other.
While there's moments that can be picked out and pointed to as evidence of the group's strengths (one of the subtler one of these, all the more impressive for how well they pull off such a non-overt section, is the burbling disquiet at the end of "Shadow Out of Time"), it's the way it all flows together that should really be earning the group the ears of those who consider themselves well-versed in heavy psych.  There's little of the bluster or posing that so many groups in that genre seem to trade on these days, as they seem to know that if you make the music strong enough, the respect will follow naturally.  And as long as this EP and its (hopefully inevitable) follow-up get the amount of listeners they deserve, that respect should be overflowing.  Fans of heavy psych that keeps it real without worrying about the glitz, get on this.
~ Gabriel