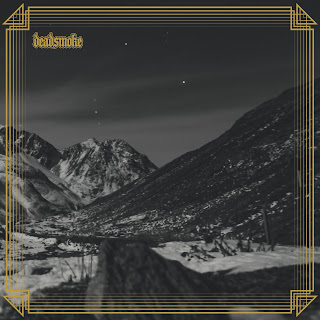 Deadsmoke's debut album comes to us from the carefully-curated catalog of Heavy Psych Sounds, and the five tracks (along with their titles) establish a clear sense of how the Italian band drew that label's attention, as names such as "Eyes of the Blind Man" and "Branches of Evil" build a retro horror sensibility before it even begins to pour out of your speakers.
As you might expect from their name, Deadsmoke specialize in stoner doom, with a lot of their personal brand on the style coming from the gruff vocals and spacy treatment of the chords, along with the genre's under-used features of samples and synths and some outbursts of sludgy misanthropy.  Setting up swirling riffs with thick bass undercurrents, dragging listeners down like a swamp's undertow.  It reaches an excellent final gasp with "Night of the Vipers", a terrifically filthy-sounding crush of low bass and penetrating heaviness, bringing the band's first ride to a close in excellent form.
For a first album, it's some great stuff, enticing at first listen and more magnetic with repeated plays.  It's not quite a head-banger, thanks to the low tempos, but played at sufficient volume, it'll grab hold of your spine and nerves and do the same work.  Dirty, grimy doom that lives up to its name, this is one of those albums that has me longing to see the band live, with hopes that the atmosphere at one of their shows is as oppressively heavy as the studio performances suggest, with "Tornado" in particular standing out as one which must have some crazy fire applied to it when rendered live.  If you've found yourself disappointed by the friendly tones of the doom you've been picking up lately, throw this one on to muscle out those happy vibes and replace them with some burning smoke.
~ Gabriel