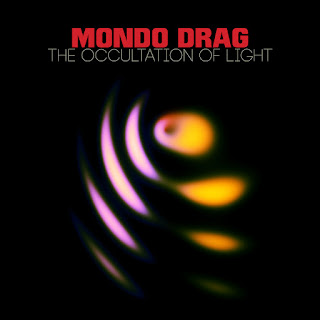 We last heard from Mondo Drag with the release of their excellent self-titled second album last year, and since then, they joined Riding Easy Records (spurring a re-release of that album) while working on putting this third album together.  The group's heavy psych/prog/krautrock style is still intact (with some of the desert rock influence of the last album dropped out for jazzier material), though they've made some experimental adjustments.  The chemistry shown by the musicians on previous albums is thankfully still going strong, and the songs are fleshed out well without getting over-bulked.  Powerful performances all around, with fluid drumming, throbbing bass, agile guitar-work, and sweet-toned keyboards complementing the soulful vocals as the songs build, burst, flow, and flat-out rock.
As good as the voiced sections are, for a fair amount of the album, the vocalist steps back to focus on his keyboards, and the instrumental jams that result are some pretty fantastic stuff, full of sharp hooks and counter-point melodies.  Had the album been done fully voiced or fully instrumental, things might easily have run a little dry, but the balancing of the two is done to very nice effect, helping the music hold up to heavy listening.  Fans of heavy rock with genuine creativity to it instead of just emulating the '70s should do themselves a favor and snag a copy of this one, check out Mondo Drag's past releases, and wait tight for their next batch of excellent tunes.
~ Gabriel