Diving Deep Into A Shallow Grave... 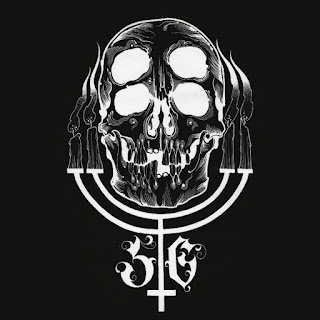 Oh, the internet, what a marvelous thing. It's brought us videos of unspeakable things, updates on people's lives you don't even care about in the slightest, duckfaces, and good music from the other side of the globe. And so has Shallow Grave come upon me. Which, to be clear, fall upon the latter category. Now ofcourse you're all thinking: 'Ruben, you make the internet seem like so dark, are you gonna present us with a nice little band to make it more of a happy place?' Well, I'm not, because when confronted with Shallow Grave it practically comes down to picking a poison: you either listen to it and get crushed by a heaviness even Atlas would be scared of, or you don't listen to it and it's members come over and kick your face in.
Now, when you listen to Shallow Grave you'll notice the music is exactly as the name suggests: it's no-nonsense psychedelic stoner metal doom drone. When I gave it my first listen I was a little judgemental about it's sound being so fitting for stoner doom drone, but as the record progressed I realised that the sound covers the genre (seriously, someone come up with a better name for this amalgamation) so perfectly it's something that it's truly soomething I've never heard before. It intrigues me. All genre talk aside though, Shallow Grave's Shallow Grave embodies a depth and complexity (oh, the irony) you wouldn't expect from a band formed as recently as 2009. The band plays so tight together it can hardly believe this is a debut album. The songs are very well layered, leaving you something to discover throughout multiple listens. A lot of listens, because it deserves it, and as usual for a modest price, this time for only 5NZD (and no, I don't know exactly how much that is, but it isn't a lot that I can tell), and there's a CD available too, just check their bandcamp.
~Ruben
For Fans Of; Electric Wizard, Earth, Sunn O))), Sleep, Zoroaster