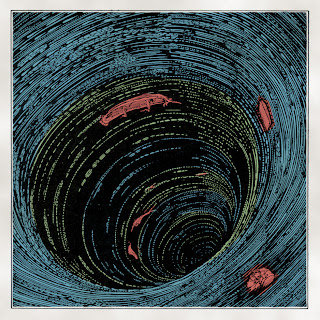 Earlier this week my brother send me a short yet crippling text - 'deepseagreen have split'. He doesn't tend to sugar coat things as you may have noticed. But a glimmer of hope did reside in the fact that he often gets things wrong. Once, when I was younger I came home one evening to be greeted with "Buster Rhymes has just died". As it transpired he actually meant Buster Merryfield, who is not a middle aged, black American rapper, but an elderly grey bearded, white English actor in his late seventies. Easily confused I know. Nonetheless, that was nigh on 15 years ago and I suspected his information held some validity this time around. This bummed me out for the rest of the day as DeepSeaGreen, although not exactly a house hold name, were brilliant. Anyone who ever caught them live or picked up their last release Valsorda will surely testify to this. Recounting a bygone era in their own unique stoner tone, the guys were true wizards when it came to revitalising an old school sound. Tunes that could easily be passed off as being 30 or 40 years old, also managed to boast a breath of fresh air. Whether it be through a sudden wahwah laden lead break or slow harmonic wind down they always seemed to give it 110%, on stage or within the studio alike. There was never any filler, or questionable pauses in quality, and thankfully the same can be said about their swan song, The Sunken Tea Party. Predominately more sombre than previously works, it does feel like theres a dark cloud hanging over the entire recording. Almost as though the guys knew like the end was drawing in, while laying it down in the studio. Not that that should be misconstrued as an adverse effect on the actual quality of the material, oh no. If anything, the overall feel and craftsmanship of the album is by far the best they've ever produced. They may well have scaled back the upbeat tempo somewhat, compared to previous tracks like Nowhere To Hide or Over Song at least, but this time around it feels like a whole lot more painstaking attention has been paid to the recording, production and mixing. I know that sounds like a completely backhanded compliment, but it's really not meant to. What I'm trying to get across is how everything feels exponentially more layered now. Even within the slower break downs of the tracks where there's nothing more than the lead and drums, you're made to feel like there's more going on than there actually is. It sounds kinda petty I know, but if you can get your head around that and how the guys manage to keep you transfixed while effectively little is happening within the song then it should go some way to explain just how tight and captivating the rest of the album is. Fear not, they by no means drew any kind of curtain on the use of their expert riffage. Just jump 2 minutes into Electrify or the final minute of Lay It On Me and you'll receive a big enough dose of fuzzy licks to keep your foot tapping into next week.
It really sucks that we've lost such a great band, but if you're gonna go out, go out on a high, and thats exactly what they've done. Besides, I can't help but feel that whatever projects the guys end up splintering off to will be enthused with a similar quality. I think we can all take away a little solace from that.
~ Jay