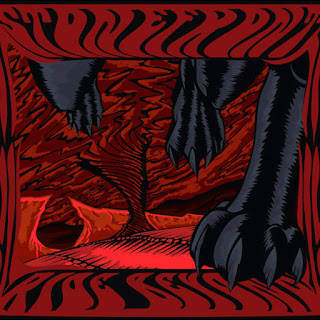 The sun's breaking through to us again, finally, so Ride Beyond from sunny México's Stonefront might be an appropriate listen today. That's probably the only comparison to anything sunny I can make here though, as the album contains dark, raw, shred-your-face-off stoner 'n' roll. Something like that. It's definitely dirty and mean but also contains high levels of catchiness. It reminds me of The Atomic Bitchwax' Spit Blood EP, though not really similar in sound, it contains the same kinda raw grooves. And also of beer, and now I find out that over at their Facebook page beer's their only band interest, and Goofy plays the bass guitar. I love these guys!
It's not all fun and games with energetic songs about death though, the album also contains a couple of ballads (mostly about death). I do find them a bit of a weak point in this album though, not because they're bad, not at all, but because Stonefront excell at delivering the catchy heavy energy! So now I'll give the record another spin (or maybe calculations would be a better term, because it's digital) and even if your ears are Crushed Beyond Repair (hint: it's my favorite song) I'd encourage you to do the same, it's great.
And also free!
~ Ruben