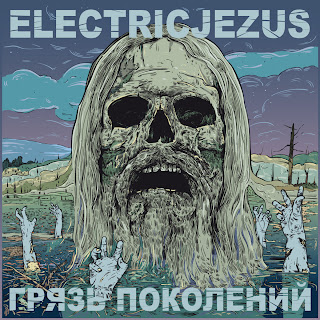 This one almost slipped through the cracks. Luckily, my mild OCD tendencies kicked in and decided to give our spam folder a bit of a clean out. Then I noticed, buried down there between the emails from sluts apparently trying to contact me and the Nigerian royalty requesting me to help them out financially a little email from Russia...
Here's the deal... Electricjezus is a two man project hailing from Dmitrov (just north of Moscow) Russia. Made up of Ruslan (guitars, bass and vocals) and Oleg (drums), the guys have chosen to go pure unadulterated doom when it comes to their set up. Whacking a bass pick up in the neck of Ruslans guitar, then using the thickest strings know to the musical world for an incredibly dirty and fuzz string section. Not to be out done, Oleg often uses a piece of metal for a hi hat. So yeah, if you thought your band were "proper metal", then think again because Agoraphobic Nosebleed haven't even got much on these chaps. I mean, they sing in Russian for Christ sake! Just top that!
Being a dirty and fuzzy mash of post metal, sludge, stoner doom and grindcore this album can't fail but tear at the very fabric of your mind. Recorded entirely using analogue equipment, the guys didn't piss around with anything fancy when they hit the studio. Utilising an old piano, some busted up mics, broken cymbals and even an old Soviet synthesiser! C'mon, tell me your band has used and old, cold war era Soviet synthesiser!? But impressive as that list is, it does kinda leave some pause for thought. A thought that all but draws to the conclusion 'Awww, this is gonna sound like utter crap'. Sure, you'd be excused for that jumping to that conclusion, but trust me, it's far from the reality. For just two guys using some old beaten up equipment, presumably in sub-freezing temperatures, this album is incredibly varied. It toys with some brilliantly disturbing samples to full effect, thats really the first thing you'll notice. The second thing is just how versatile it is. Yeah it's predominantly cut form the same sort of cloth as early Soilent Green and Extreme Noise Terror but it manages to fluctuate so effortlessly between that, dirty eerie doom (much like Eagle Twin or Wolves In The Throne Room) and full bore, post punk hardcore (akin to Unsane and Rorschach). It's chock full of groove and grit in equal measures and if you ask me, thats one hell of a feat. But I could jabber on all day about these guys, you really need to go and experience them. Besides we all know the Russians don't pull any punches when it comes to this shit, and this big fat fuzzy slab of post-sludge-grindcore is a another prime example. Go and get it.
If you've got the balls.
~ Jay


For Fans Of; The Day Is Today, Acid Bath, Kvelertak, Devil, Kamni