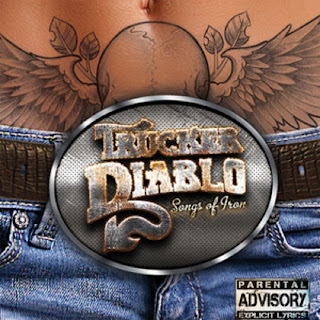 Gotta admit that there isn't a lot that I know about Ireland, except that I like to drink what is brewed over there. That pretty much means it's one of my favourite countries in the world, and Trucker Diablo only enhance that opinion. Their latest release, Songs Of Iron, is a hard rock record perfect for a booze fueled night out at the bar! It's energetic, mean and dirty rock 'n' roll with here and there a glimpse of glam. No need to say it was perfectly to my liking from the moment I first heard it. Actually, hold on, not needless to say, I like it so much I want to say it over and over again, but that would make for a pretty uninteresting review though.
Trucker Diablo tirelessly rock hard throughout the album; here and there they give you a second to let you catch your breath, but mostly they go out balls to the wall shredding guitars, loud drums and incredibly catchy vocals. The band's young (they started in 2008) but they know what they're doing. They've played major festivals like Download, opened for The Foo Fighters and earned recognition by fellow Irish Thin Lizzy, which goes to show how much they have it together.
Now I know this review goes up on a Monday, but even so you should do yourself a favour and grab a cold pint, sit back and turn on Songs Of Iron. Loudly. It'll be a great start of your week. I know I will.
~ Ruben