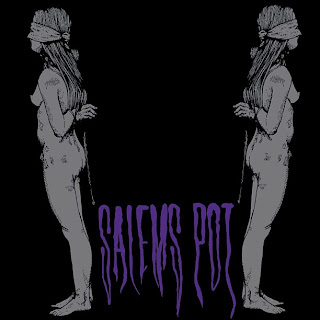 What's dirty, heavy and practically free?... Nope, not your mom. I'll just tell you, Salem's Pot, thats who.
I really wanted to bring you these guys a little sooner, but I also wanted to have the vinyl in my hands as I did so, but thanks to our postal service and their willingness to drag it through customs and then slap me with an £19 ($30) import bill, it got somewhat delayed. Sorry. Actually, no, no I'm not, bollocks to you all. You wanna blame someone, blame the pricks at Parcelforce.
Anyway, I digress. I found these guys much in the same way I actually stumbled upon the awesome Moon Curse, through Instagram of all places. Having landed on the profile of a small west coast record label that goes by the name Easy Rider Records, I delved a little deeper and discovered a cracking little treasure trove of limited pressed vinyl, short runs and rarities. It goes without saying, I franticly began clicking away and adding things to the sites cart, then blitzed through the checkout. Amongst my first clicks was a couple of the preorders for Watch Me Kill You. Now if you've got half a brain in your nut, you can probably roughly deduce Salem's Pot's sound just from their artwork. Dark, heavy, doomy and fuzzy right? Well, spot on. Like a slower, sludgier version of Electric Wizard tuned so low that they could loosen the bowels of Satan himself. In fact if you ever heard Electric Wizard's Supercoven EP, just imagine that slowed down and played through a haze of bong smoke... Ta dah! That's the sort of treat you're in for here. There's only two tracks running for a total of about 25 minutes but every moment is fully laden with relentless waves of crushing and fuzzy riffs, drum beats and tales of the occult and torture. Interspersed with Knate's occasional whaling guitar solo's and healthy doses of feedback, the whole effect coupled with Skoog's deeply haunting vocal interludes goes on to paint one hell of a dark and twisted audible picture. It's like a Hammer House Of Horror psychotic death trip through the mind of Aleister Crowley. Dark, groovy and to the uninitiated fantastically creepy... I love it!
Which actually explains why I picked up a couple of copies of the thing on wax and a tshirt, which you should too! So dig out your wallet and act fast, because the die hard version ( /30) and super diehard test presses ( /25) have now flown off the shelves and I will bet my bollocks that the purple wax ( /75) and the black ( /150) are not too far behind. Head over to Easy Rider Records right now! You'll be supporting a great band and an awesome little record label. Besides, just look what you're missing out on if you don't...
~ Jay