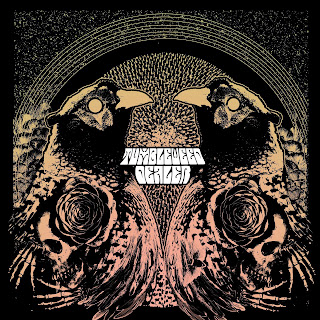 Tumbleweed Dealer are a fine example of not having to be surrounded by sand and cactus to create a true desert rock tone. Being from Montreal, I suspect they've never actually seen sand (Canada's like 90% snow and ice right?)... Anyway, they proved this once with their first EP Death Rides Southwards last year, and now the duo are back with their first full length album.
Straight from the get go you can hear how the guys have progressed since the EP. Having cultivated their own style of instrumental stoner post blues, this time around they've upped their game and given the whole effort more... body? Everything feels fuller and more layered. Where before they sounded like a duo, now they have taken on ambiance of a full quartet. Post rock harmonics meet the unique desert/southern rock twang more associated with bands from the likes of Tennessee or the west coast. It's like God Speed You Black Emperor meets Yawning Man. It's a pretty flawless display of technical ability, as the entire record evokes a certain surreal, slow and impending feel of slightly upbeat melancholy. It twists, turns and meanders through a truly moody post rock affair but just neglects to succumb to that usual familiar post rock tone. It's unorthodox but it actually works surprisingly well, although I imagine it won't be to everyones liking. As the occasional chugging guitar riff does rear its head, it is used more sparsely that I think most would wish. Which is really a shame because through those few heavy glimmers of thunder the guys do prove that they can really nail a good heavy groove. But who am I to tell them what direction to head in? If you like your bluesy post rock and anything remotely desert rock then I think Tumbleweed Dealer may just tick some of your boxes. Roll up some of the green or throw back a mushroom or two and loose yourself, because this would serve as a fantastic soundtrack.
~ Jay