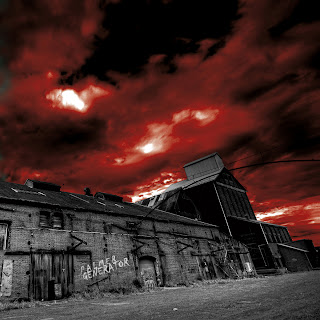 It's been a while since I've had some post rock/metal turn up in my inbox. Which I must say, doesn't bother me too much as it's more often than not a pretty mixed bag. I do love the genres, but I'm just not sure I contain enough enthusiasm about to fully appreciate everything I receive. None the less, I'm (relatively) open minded so when Italy's Palmer Generator dropped me a message I thought I should knuckle down and see what I thought.
Straight from the get go and quite solidly for the first six minutes you get a real sense that theres a heavy industrial influence flowing through this album. Not quite in the same league as Trent Reznor (well, who is?) but certainly nipping at his coattails. That familiar early Nine Inch Nails tone rears its head at moments, and does actually remain a sort of foundation to the album, but it is soon met and intermixed in with a plethora of other styles and characteristics. Just half way through the opening track Phoneutria you're suddenly met with a dark ambience more akin to shoegaze, then if that was enough, it's swiftly followed by pure, mid 70's prog rock, predominantly in the form of a flute(?), played by 'Andrea The Peruvian Piper' according to the credits. It's kinda like listening to Ministry play in one ear and retro Dutch prog wizards Focus in the other. Conflicting on paper, but strangely complimentary in practice. But once again the formular changes when you hit track 3, Jargon. Within seconds you're met with with something that could quite easily be passed off as Pelican in their prime. Then, once again, you're briefly thrown a curveball in the shape of a desert rock. Like a stoned Fu Manchu had just burst into the studio, played a few licks then disappeared just as quickly as they appeared. Again, not a combination that you would necessarily assume works well, but once again you're left having learnt a lesson. This unconventional approach plays on throughout the entirety of the album. It is pretty unorthodox and as a result it can leave you somewhat baffled at first, even to the extent of having to check you didn't just accidentally skip to the next track, or even artist on your iTunes. That being said it does manage to fall just shy of being utterly confusing and overly disjointed. In fact, despite being an amalgamation of classic rock, post rock, prog rock, space rock, desert rock, stoner rock, southern rock, doom, shoegaze, post metal, industrial, blues and jazz there was only one element that just didn't work for me - the vocals. It's not that they were essentially bad or anything, just that they never really felt like they fitted in. I've thought long and hard about it and come to the conclusion that it's down to the fact that everything else is so diverse and free to flit from style to style, tone to tone. You just can't afford that same privilege to vocals. I think that if they dropped the singing and maybe played around with some samples instead everything would really drop into place just perfectly. Still, the vocals are quite few and far between so you may not even give them a second thought. Besides, there's such a massive selection of riffs, epitomising so many genres of the last 40+ years, you should be left more than satisfied either way.
~ Jay