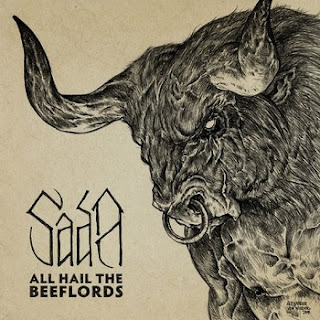 In the early years of metal, some bands still embraced the "hair-band" aesthetic (lame), but could clearly rock and knew where the genre was destined to go. Luckily, those bands have inspired a whole slew of great acts today across the globe...I'm talking about the shredding, not the perm or the neon-red, leather pants. Anyway, I was introduced this week to SADA, a British powerhouse that never lightens up the pace and brings the intensity (and fun) of late 90's metal that just makes you want to kick off some heads and throw up the horns.
After a seven-year hiatus, SADA is preparing to release their official debut album (originally recorded in 2006), and, truth be told, the band is clearly ready to hit the scene and explode some eardrums. Masterful drumming, solid vocals and an ensemble of classic-sounding yet fierce guitars drive SADA's album from track to track, showcasing moments of epic stoner greatness that still hold up today. With some titles like "Bride of Cuntenstein" jumping right out at the listener, SADA makes it apparent that their sense of humor remains intact amongst the slamming and jamming, the riffs and the primal feel of the breakdowns.
While similarities and comparisons will always be made between acts, SADA maintains a strong sound that is unique, dirty and admirable. Sludge, doom, drone, tech...they all their place and influences on metal and the artists that create it every day. For my money, give me quick-and-to-the-point, balls-to-the-wall, hard-hitting rock that reminds you of why you love the music you seek out and cherish. If you feel the same at all, do yourself a huge favor and go check out SADA right this instant.
~Joe