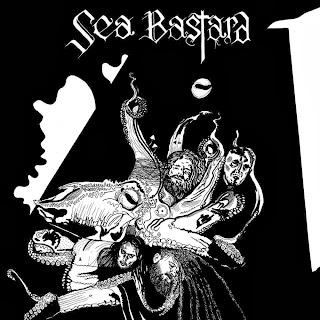 Let me start this off by saying that this album is big. Seems like a weird thing with which to start a review, but if you pick up a copy of this album, as soon as you see the track durations, it's going to hit you: these guys are in it for the long haul. See, there's only four tracks (which I'll get to in a minute), but those four songs add up to nearly an hour of hard, demanding doom resonance. Scabrous is so sludgy, so tar-stained and sticky, that it's probably not the best choice of listening while operating heavy machinery. They start things off with the staggering Nokken, which I'm frankly at a loss to describe; the best approximation I can provide is to ask you to imagine the perfect soundtrack to Godzilla destroying things, complete with atomic fire-breath. After Sea Bastard has established that they're not here to waste any doom-seeker's time, Nightmares Of The Monolith steps in for a more traditional doom metal round, setting up a rolling drum-riff against serrated guitar hooks. At only eight minutes (and eight seconds), Door Sniffer snags the position of shortest track, but packs enough wailing feedback into that time to make up for it, with the speed helping pick up momentum on the way to the final track. Metamorphic Possession lumbers out 20+ minutes, and in that time, things get even heavier; if you were seated while listening, you'll be melted in place by the end.
~ Gabriel