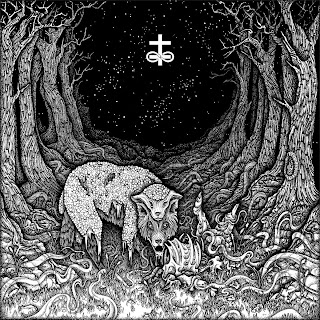 If you're looking for some thoroughly miserable sounding Doom Metal, man, this sounds good. Hailing from Denver, Colorado this ridiculously heavy, two piece group known as "In the Company of Serpents" have put forth their second album in as many years, "Of The Flock", and it doesn't disappoint, sonically crushing all the way through. Although, the intro track "Ash Swamp" may not give that impression as it's pretty mellow sounding, but it shouldn't stop you from hearing what else the album has to offer.
The heaviness really starts with the second track "Craven", it opens in a chaotic flurry of drums and hardcore style riffs, but levels off after just a few moments into a immensly heavy Doom/Sludge track. After about 30 seconds, you'll have no choice but to nod your head with the riffs being laid down and the gravel filled vocals are reminiscent of Crowbar right from the start. Probably my favorite track, off an album of great tracks, is "Of The Flock", opening up with a slow drum beat, then a crushing riff just pummels you for the entire duration, further and further down. This is one of those tracks that gets put on your favorite system and cranked all the way up until shit starts shaking off the walls and windows shatter.
In the end, this whole album is heavier than damn near anything you've ever heard, with influence sounding like it comes from the heaviest of places. Passages on songs going from Sludge to down right Funeral Doom, with another song having the vibe of any Bongzilla, Stoner Doom classic. When you have a melding of that much heavy music, you know the creation yielded is going to be one heavy as hell, monolithic bastard, and that's exactly what this album and band is. And if you needed any more incentive to check them out, this release was mixed and mastered by the man Billy Anderson, his is always a good stamp of approval in my book. So, head on over to their bandcamp, and give the album a listen.
~Skip

Email ThisBlogThis!Share to TwitterShare to FacebookShare to Pinterest
Labels: Doom Metal, In The Company Of Serpents, Of the Flock, Sludge Metal, USA