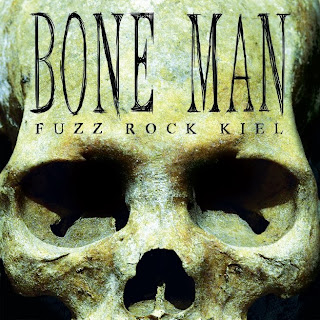 This Psychedelic Grunge Rock band from the reaches of Northern Germany call themselves Bone Man. But simply labeling them as that and moving on would seem to be a disservice to their 5 year career, throughout their catalog, in different songs, you can see clear examples of many different styles.
The song "Wicker Man" is an acoustic track that almost reminds me of an European folk song, the simple, mystic type lyrics, with a theatrical Doom Metal sort of delivery (think Messiah from Candlemass) can even remind you of the flick "The Wicker Man".  But then you move to a song like "A New Breed" and you're attacked with a heavy rock, extremely Sabbath-esque song, same sort of Messiah-like vocal delivery for the most part though. I really, really liked this one, reminded me of Sahg a bit in places. But you get to a track like "Closer To The Sun" and that Psychedelic Rock influence in their music starts shining through brightly. It meanders back and forth between a heavy rock song and a couple of acoustic parts, even an electric organ a la The Doors, the track really has a lot going on, and they still manage to make it fit together and meld so well. An exhibition of their straight up Stoner Rock prowess, the song "Carnosarurus" opens up at 9 seconds and doesn't stop again for almost another 3 and a half minutes, with some of the vocals bordering along Punk Rock type screams towards the end. Overall it feels like the band likes to explore their sound, and there isn't anything wrong with that as they nail pretty much everything they do.
They have an album, a couple of EPs, and a couple of splits out, so go on over to the SoundCloud or Facebook, and drop 'em a line, you can also pick up their album on vinyl at Pink Tank Records (includes tracks "A New Breed" and "Closer To The Sun").
~Skip


For Fans Of; Motorhead, Black Sabbath, Alice In Chains, The Doors