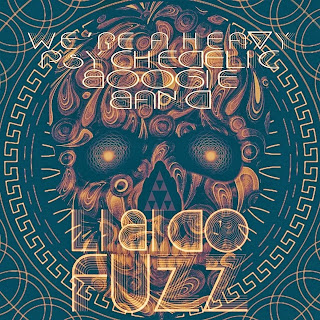 Well, the title kind of gives it away doesn't it? This three piece psychedelic/blues rock band is from Bordeaux, France and aside from the awesome name, they are definitely are worth your time.
This EP almost seems out of place today, after listening to it all the way through a few times you start to hear some modern stuff going on, but even then it wouldn't of been out of place somewhere in 1968 it seems like, from the vocals to guitar playing and even bass and drum parts, it's all really retro sounding, but in the best of ways. It starts off with a track called "Sunset", and automatically goes into a good ole' fashioned, toe tappin', rock riff. If you're looking for a dance song to play at your next acid party (or just like going to acid parties), this is definitely for you, as is the whole album really, should make you feel like you're trapped in the 60's or 70's and couldn't get out if you wanted to. My favorite track was probably "The Last Psychedelic Blues", this is where the modern shows through a little and you're left with what sounds almost like a straight up Stoner Rock jam. After that though, it's the closer, the big guns, "I Was Made On a Desert Road", 7 minutes of Psychedelic/Blues Rock goodness, this is the critically acclaimed song so many say makes purchasing the whole thing worth it, and in the long run, it probably is. The vocals are great on every song, but really seem to stand out on this one, full of soul with just that right bluesy edge to them, and the bass parts in the middle and end of this song grooves so well. This is one of those songs it's not hard to space out to for hours, just smoke something and get lost in it, never to care if you find your way out or not. When it's done, you'd want to be made on a desert road too.
Really can't wait to see what they come out with next, this one will be hard to top. Now, there's a couple of ways to go about getting your hands on some of this fuzz, starting Friday (Nov. 8th) the vinyl pre-order starts over at their Bandcamp, where you also can go for the digital copies, but they're also going to start taking pre-orders for the vinyl through Pink Tank Records, and it should come out sometime in mid-December. A limited version of 100 copies will come with a signed poster and metal Libido Fuzz pin for 14 Euros and a standard version for 12. All will be hand numbered and on 180g vinyl, should be a good addition for all of you vinyl fiends out there.
~Skip