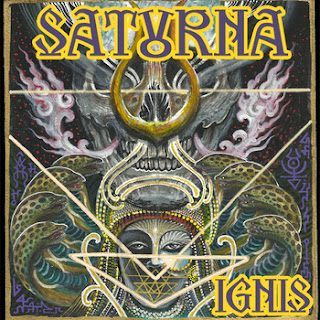 Saturna is a heavy rock band from Spain, a 5 piece that plays loud, ass kicking rock and roll straight out of the '70s, part of that Retro Rock movement we're all so fond of. This is their second offering for us, and every track is heavy as hell straight up rock. There's a ton of good ole' fashioned Sabbath worship going on here, and it's a good thing, no, a great thing. And it would seem just as you're really digging the Sabbath vibe, you're hit with a dose of Southern Rock, fried, dyed, and laid to the side.
The first of the standout tracks for me is "Sonic Keys", it starts off as a straight up rock and roll song, a real crunchy kind of riff and a real deep rooted Southern Rock tinge in the second half of the track, you don't even expect the change, but it works perfectly. The next track to really catch my attention is called "Beside a Dying Star", and it's nothing like the first song I mentioned. This is much slower, in the vein of early Doom Metal, between the guitar tone and the way some of the vocals are belted out, it reminded me of Pentagram quite a bit. One of the last tracks on the album is called "Science and Transformation", it pretty much hit every mark for what a great rock song should be, awesome guitar tone, pounding drums, a real groovy bass line wedged back in there with the drums, even has some shouted, hardcore style vocals towards the end.
This being my first run in with this group, I have to say they've made a brand new fan. From beginning to end, the whole album is just an awesome rock record, well worth running on over to their Bandcamp and checking out. It says that it was released on Nov. 25th, and there's no buy option yet (except track by track it looks like), but you can give the whole album a listen right there on their page. I'll be heading that way to pick up their first release "The Kingdom of Spirit".
~ Skip