The Backbone Of The Universe... 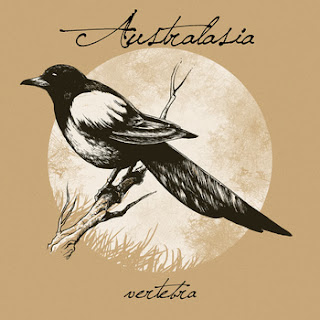 Australasia's latest album found its way to me at just the right time. It's that time of year (at least here in the States) when the cold starts to creep in, you find yourself cooped up inside most days and are looking for something to keep your brain inspired and driven. While music in itself is always an art form (say what you will), there is something special to be said about about those who restrict their talents to simply the sound of instruments. For years now, prog rock masters like Pelican, Zombi, Explosions In The Sky, etc. have been paving the way for instrumental-oriented artists, exposing the craftsmanship in music as opposed to the dribbling incoherence found on any Top 40 station still broadcasting today.
On Vertebra, Australasia covers a huge territory of synth manipulation, spacey guitars, blast drums and an array of rarely heard instruments in the prog scene, most notably the xylophone. While the album reminded of other groups more than once, it is hard to argue that Australasia is not on the cutting edge of the genre today. In comparison to other prog opuses that are heralded by the masses, Vertebra differs in that most songs don't break the four-minute threshold, somewhat of a rarity when pure emotion and creative endeavor often drive the length of songs into double-digit territory.
Both raw and beautiful, Vertebra is an album that can be heard in under an hour, but ultimately sticks around in the listener's mind for hours, if not days. The sound of nature even finds itself amongst the ringing of fluid strings and pierce of synth keys, a gorgeous element of sound that adds the finishing touch to the album. While the record could easily serve as the best music ever to fall asleep to, it would almost seem a shame to miss any moment before its completion.
Vertebra  is available through a number of digital retailers, but can also be picked up in a more physical format at Immortal Frost Productions.
~Joe

For Fans Of; Mogwai, Red Sparowes, Russian Circles, This Will Destroy You