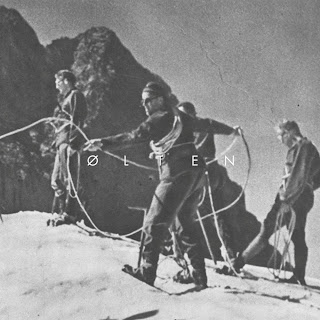 Hands down one of the best records in it's genre this year!...
About a week ago I had the privilege of stumbling across a fantastic band from Watch Valley, Switzerland and falling in love with their unique brand of post-rock/sludge inspired instrumental art. That band is “Ø L T E N “ and their current release (Ø L T E N - s/t) This 4 song EP grabbed me from the first 2 minutes and held me to the speakers for the remaining 23 minutes! (Peplum) opens the release with one of those ambient swells that you could just space out on for an hour on its own it so entrancing. This is just the prelude to a pulling march that leads into stop/start sludge riffs. There is a sadness and eventual sense of resolve emoted in the track. It is just my opinion of coarse but any band who can make you feel something profound with out speaking a word is on another level. From there we head into (KÀpoÉ) exploding with sludge and grime then cascading into a trance like state. This track is really about building the wall of sound and the march to the wall! I image waves crashing against a literal wall nearing the track’s end and finally the wall collapsing. (Tallülar) the metallic clang of the guitars had me at hello so to speak! This track just moves with a sense of purpose and power.The bass grinds away on the left with the guitars both crunching and chiming in the right. At this point if the wall fell in the prior song this is the town being taken over by brute force and flame! On the climax of the EP (Blöm) which I can say is my favorite on the release calm enters only to be followed with the resurrection of force and movement present in the previous tracks but certainly feeling more triumphant! Half way through the track the hair on my arm stood up. Anyone who has had one of those moments with music can relate I hope..It just struck a chord with me that make me have goose bumps! Having listened to a ton of music this past year and the majority of it being post-rock/post-metal sludge I can with out a doubt say “Ø L T E N” is hands down in my top ten records of the year for 2013
~ Stephen